Well, this one has been a long time in the fixing.

The Kodak Panoram No.1 is an amazing and very unique camera dating from the turn of the century.  The lens swings through a 112 degree arc to take a huge panoramic image.  Only four images fit on a roll of 120 film.  Usefully, it has a built-in spirit level.

Simon Tomlinson asked me to take a look at this in the middle of last year as the fine leather ‘bellows’ had rotted away.  It took a while to find the right leather and make some modifications to the internal light baffles – the lens never closes, it just sort of ends up in a little baffle at the side, then when you take the next shot it swings over to the other side.

I also discovered some screws fouling the reels of film and that stumped me for ages, mainly because I didn’t want to cut the original screws.  If anyone knows where you can get truly tiny brass wood screws then please let me know!  CaptainBonobo helped me out and I finally got it all back working around Christmas.

Although the Panoram usually has a black leather covering, Simon took this off and I agree it looks rather fetching in natural wood.  It is certainly a camera that intrigues and starts conversations with people – one of the big upsides to funny old film cameras I find.

It’s simple in use.  Just wind on, cock the mechanism, compose, and release the shutter.  The viewfinder only shows the middle of the image, and the lens cover also covers the viewfinder, so you can’t really leave the lenscap on – a lovely piece of simple engineering.  Double exposures would be trival – just recock and take another shot.  I think I felt happiest with the box on a tripod rather than handheld, which makes it a little more cumbersome to use, but it is pretty light and easy enough to lug around if you have the space.

Internally the film follows a curved path – sweet and simple. 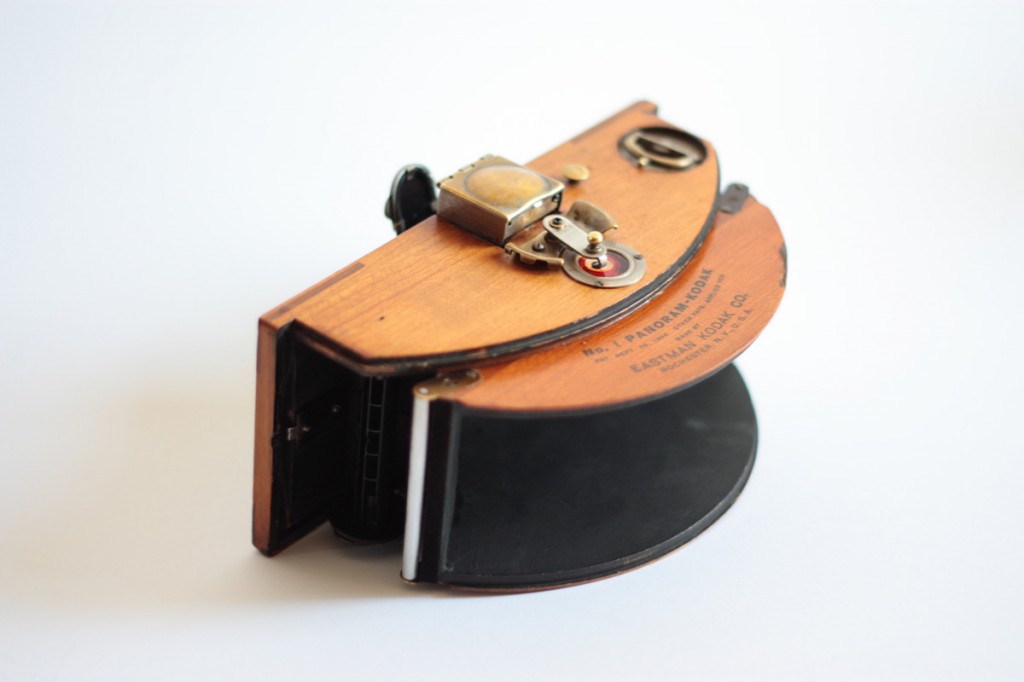 The Kodak Panoram certainly gives you a unique perspective and Simon used it a great deal on his trip to Equador recently.  I can’t wait to see the results!

These are just a couple of test shots.  Simon’s one is all cool and creative an that, but then he is a bit of a genius.     :)